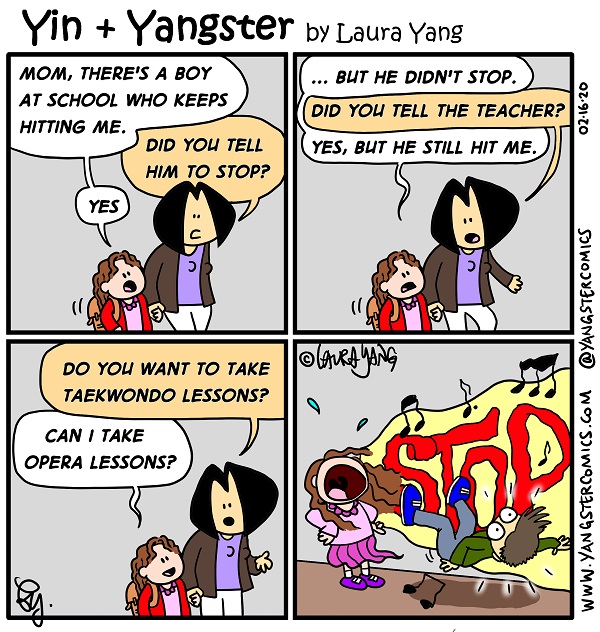 This week my 5 year old daughter came home from school claiming she was punched in the face by a male classmate.

I listened to her and let her explain what she could but secretly I’m the first to quickly dismiss her claims. She did have noticeable darker indentation spots on the bridge of her nose where her glasses sat. Hmm, I’ll ask her teacher the next day. Later, I was horrified to find out it was all true and this is how it all unfolded:

It was during a transition, coming back from music class. He was supposed to be behind her in line (they have a numbering system) but he went in front of her. He turns around and punches her in the face. Her glasses are knocked to the floor. Much crying ensues. A female classmate runs to tell the teacher. The special ed assistant witnessed it all and confirmed it was unprovoked. The boy vehemently denies any wrongdoing. She was sobbing through lunch and hardly ate so was allowed to eat during quiet time after lunch.

My heart felt so sad for my girl. My gut reaction was to dismiss it and yet it was even worse than what she explained!

Why wasn’t I notified on the same day?

Her teacher acknowledged her failure to do so being preoccupied with the aggressor and his parents.

This boy is known to be trouble in the class so it wasn’t surprising. Apparently this isn’t the first incident with another classmate, but his mother has apologized to those families. Me? Nope, at least not yet. And yet, she had the perfect opportunity to do so the next day as there was a Valentine’s party at school with parents and our kids, yes, her impulse-control issues son, and my daughter SIT AT THE SAME TABLE AT SCHOOL!!! And we have a cordial relationship!

And yet, I was recommended not to confront her because I am not a neutral party. Well, some acknowledgement would be nice. An apology even better….something!!

The teacher explained it wasn’t just simply a matter of speaking with his parents, but it was larger than this. She also suggested perhaps he has some underlying undiagnosed issues as well and has some kind of behavioral plan with the principal moving forward.

I feel for the kid because I want to believe it wasn’t intentional, that none of his aggression is. But, at the end of the day, my daughter needs to feel safe at school. It is my job to ensure this happens.

She told me she forgives him and that his issues may be causing him to do this. She even high-fived him at the Valentine’s party at school. I told her if he keeps pestering her even after repeated verbal warnings and then telling the teacher if he still doesn’t stop, then she had my permission to stand up for herself physically. She rebutted with “We’re not allowed to do that. The teacher said we can’t.” She is a rule follower and a teacher-pleaser. She loves school and I would never want something like this to come in the way of her love of learning.

So after careful consideration and consultation, I will be documenting this incident and writing it in a letter to the school and go from there.

This cartoon illustrates a conversation we had that made me smile. Sometimes I wonder where my daughter gets her ideas! LOL

And I wanted to end off with an illustration of 1 aspect of the kind of person my daughter is. Today I was driving in traffic and got cut off by someone and I kind of growled under my breath:

Me: Ugh, that ding-ding just cut me off!
B: Don’t do that back to them, Mom.
Me: <I wasn’t going to but was curious what she was thinking> Why not?
B: Because you have to teach them how to be better so they can learn.

Dangnabbit, whose kid is this?!!