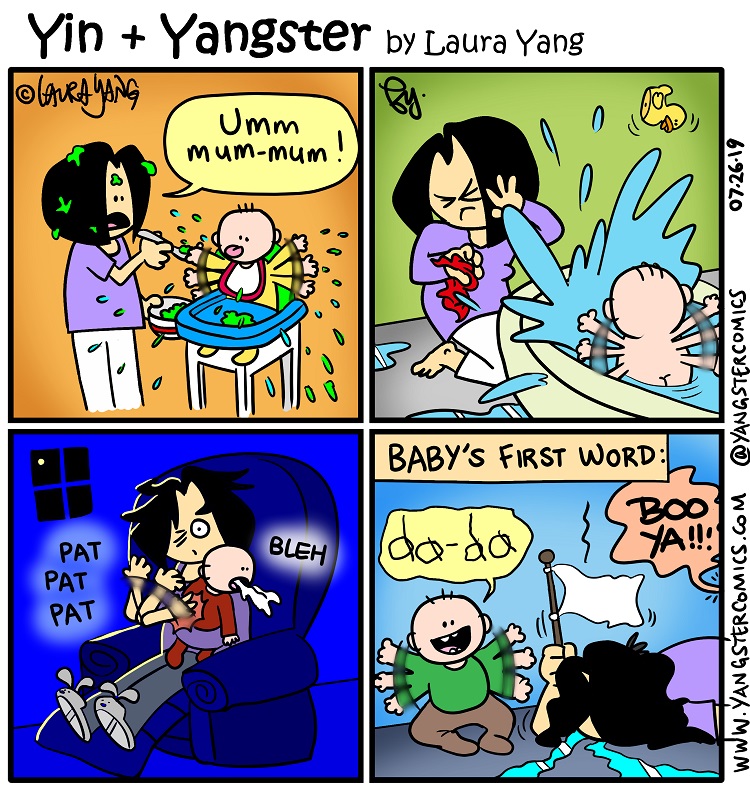 Ain’t this the truth? lol

So i drew this with only one baby since drawing the twins is a bit challenging in each panel, plus there simply isn’t enough space for the second twin nor was it necessary. Also, I’m just not that great of an artist to be able to change up the vantage point to squish in more stuff. Then as I began drawing, it morphed into 3 panels of flailing arm baby complete with all the liquids being sprayed in my direction. Haha, it was too fun not to include that. Not really a focal point to the punchline but just a common thread for the first 3 panels.

The twins are on the verge of saying their first words. My boy is part bird though, or pterodactyl since he screeches this nails-on-chalkboard screech when he’s happy, when he’s impatient, when he’s excited… just basically all the time. The only reprieve we get for a few seconds at a time is when his mouth is full of food or drink or when he’s asleep, thankfully longer than just a few seconds!

Anyway, I think he may have said mama or dada but never intentional I don’t think. Same with my daughter. She has the cutest little raspy giggly voice that I would love to record and keep forever. I always marvel at how much the children develop early on in the first couple of years. From virtually a clean slate, to cooing, babbling, turning over, sitting up, pulling themselves up, cruising, and then walking and talking. It’s truly such a privilege and possibly one of life’s greatest pleasures — to watch them grow into their own person.