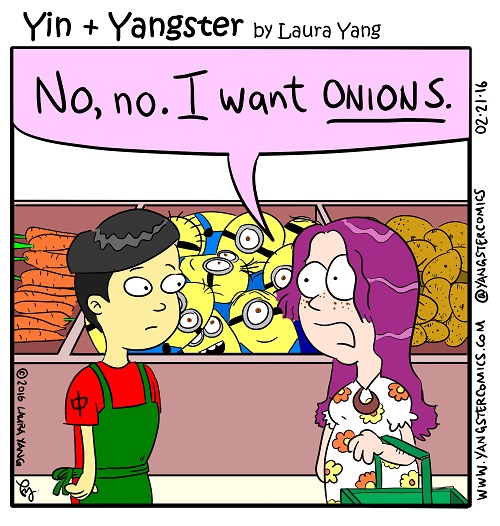 One of the hottest children’s characters recently has been the minions from Despicable Me. I was a bit late to catch on but I figured they sounded really similar to onions. How silly would it be to have them arranged like onions in a grocery store with a misunderstanding from a Chinese worker? I do love a lot of colour and so when I colour my cartoons, I run through the rainbow in my head to see if I’ve missed out any colours. The red on the Chinese worker is fitting since the Chinese do love their red as they consider it an auspicious colour. Also, I have the Chinese character “zhong1” or 中 on the sleeve because I’ve seen this clothing brand, incidentally also on people’s bumpers, that looks like that but not quite. I’m not sure if this brand is a parody of “China” since 中 forms 中國 which means China. 中 itself means middle, centre, within, among, in, during etc. 國 or “guo2” means country, nation or state. For more information on why China means “central nation” click here. Anyway, I guess I’m parodying a parody of China.