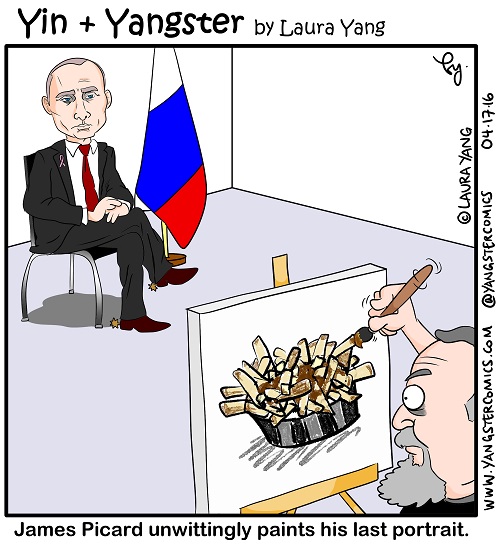 Earlier this year when I was in Montreal, I made sure I ordered the local delicacy known as poutine. The local Quebec french accent pronounced it “poo-tan” and that’s when it struck me that it sounded so much like Putin.

James Picard is a nifty local artist I met when I was working at the Vancouver School Board summer school at Eric Hamber (summer centre of the arts, but now I think that title belongs to Magee). He taught painting and drawing and I was fortunate enough to be assigned his assistant. Upon first meeting him, I thought he was a biker dude. He was a burly man with a full beard, a few tattoos on his arms and he wore a black T-shirt with jeans. He looked intimidating until he opened his mouth. Such a gentle sweet soul and so passionate in teaching kids. He was always jacked up on coffee and chocolate bars. Hilarious as heck too. I don’t think I’ve laughed so much as a kid at anything other than farts at that age. And boy can the man paint! Do check out his work at www.jamespicard.com. I have much respect for the man and what he does. And despite his busy schedule, he agreed to come in as a guest speaker into my career prep class in grade 12, talking to us about his career as an artist. What struck me was his passion in pursuing his talents in spite of all the setbacks he encountered its early stages. It’s that kind of tenacity and grit that inspires me to keep going.

By the way, I got his permission to draw him in this cartoon. And he loved it! 🙂

However, I did not get the Russian dictator’s permission.