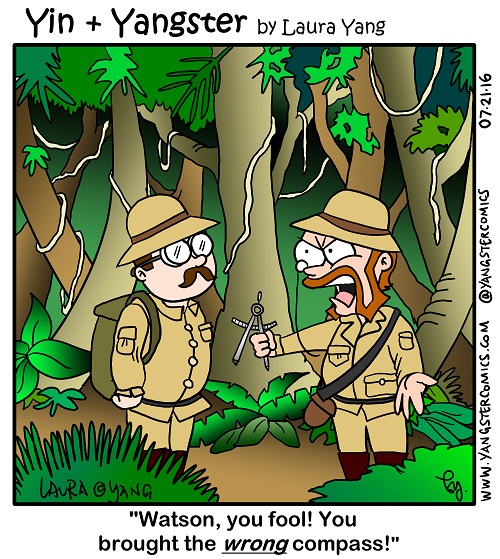 I actually drew up a black and white NYer style Valentine’s Day cartoon before I left for Mexico but alas VDay didn’t fall on a Friday! :p

We just got back yesterday and I haven’t drawn the entire time. I never felt so lazy in my life!!

I have a bunch of ideas I want to draw out, perhaps a mini series of the Yin+Yangster clan on vacation but my biggest nemesis is time (or maybe these children of mine since they take up so much of said time LOL). There’s never enough time in a day! If I could, I’d love to draw at least 3 times a week. Life passes by way faster than I can draw at the moment. Erghhh.

Anyway, this cartoon was drawn up a few years ago but i didn’t have a chance to publish it. The gag harkens back to the days when I was a math teacher. I guess I technically still am but I’ve been on mat leave. I used to draw single panel cartoons when I first started Yin + Yangster because truthfully I thought it was easier buuuuut i’ve since evolved to multi-panel strips that are more autobiographical and honestly, just simpler. So on occasion, I’ll bust out a single-paneled cartoon. I suppose I secretly wish I could do both well just like fellow BC cartoonist Adrian Raeside of Coast to Coast (multi-paneled strip) and his editorial cartoons (single paneled). His stuff’s great!! 🙂