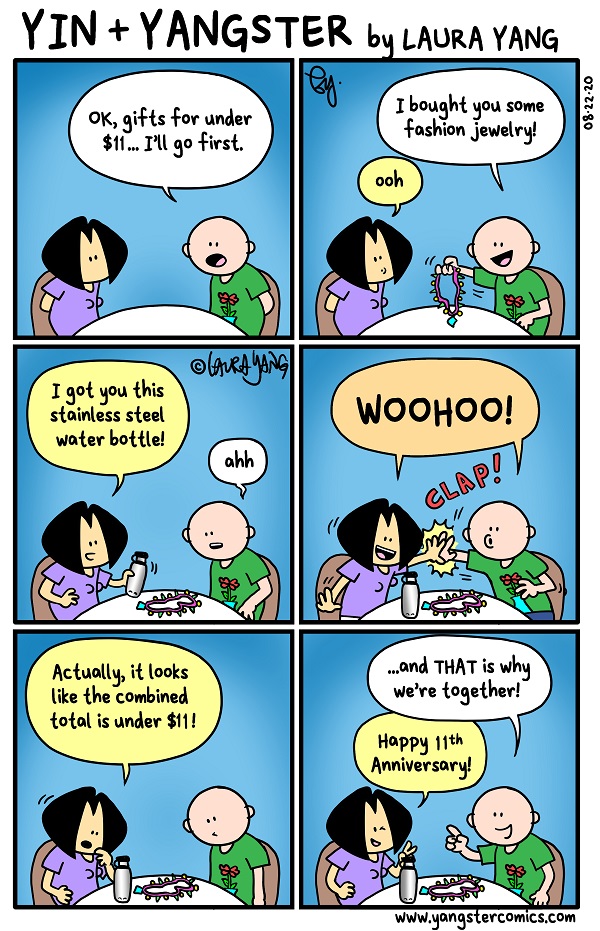 When we first got married I thought I’d draw him something every year on our anniversary… so I think I managed to do that for the first year, the 7th year (you can see it here https://yangstercomics.com/life/happy-anniversary/) and now the 11th year. Hahaha

I googled what the anniversary gifts were for the 11th year and got: steel, fashion jewelry and a flower commonly seen in the spring. I initially drew it on the table, in a vase but it was too cluttered as I needed the focus to be on the gifts to each other. So, in order to incorporate this into the comic, I just slapped it onto the male character’s Tshirt. Lol. Guess what flower it is? lol

It’s been quite the ride…. soooooo much has happened in these past 11 years…  what I’ve concluded is that my husband complements me where I am deficient and so I think we make for a pretty good team! 🙂 He’s really smart, silly, honest, upright, grounded, passionate… oh and he’s very nice on the eyes too! LOL

Plus one thing that’s meant so much to me is he’s always encouraged me to pursue my passion of drawing comics when I felt like giving up. So, thank you for being there me… and Happy 11th Anniversary!!